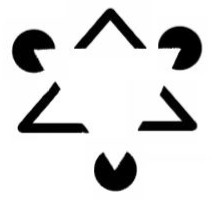 At lunch today my wife told us a brief story that our neighbours are moving house. My son, who works in the same company as the neighbour, confirmed that being talked about in the company. My wife continued with the reason why the neighbours, who are our friends, waited so long telling us. My son was of a different opinion, “I don’t believe that.” he said.

Now isn’t that interesting if you look at this conversation carefully. There are quite a few assumptions

First, my son and I think the story is about the neighbour is moving

Second, we believe the reason for not telling us earlier is my wife’s assumptions

Third, my son’s different idea of that reason

We could have gone into quite a debate about it at the time, but we didn’t and started asking question. And this is the core thing to do when dealing with assumptions.

Verify your assumptions against the information you have on the problem.

Look at the well known image above. What do you see? Most people can see a white triangle that overlays three black circles and a black triangle. And how do we do this? There is not really a white triangle, but 6 black shapes that suggest so. Our brain fills in the gaps based on our knowledge and experience. The most likely reason why we can see the white triangle is because it makes sense to our brain. The 6 black shapes for themselves have no particular meaning.

Assumptions are a tricky business. We may start at the same (or nearly the same) point meaning we have been given the same task and the same information. Based on our experience and knowledge we start on the problem. If we don’t check back or check with each other we will divert more and more from the same path. Look for example at the TV show “Amazing race”. The teams are starting at the same time with the same information. After 4 stops (check back) there are significant differences how well and how fast the teams master the challenge. Without stops and the occasional “how did you do that” most teams won’t make it to the final finish line in a timely manner. (and this is an assumption!)

“Don’t Make Assumptions. Find the courage to ask questions and to express what you really want. Communicate with others as clearly as you can to avoid misunderstandings, sadness and drama. With just this one agreement, you can completely transform your life.”

It is essential in any relationship, in any problem solving task, in a business deal, or simply if you should buy that car or dress to do 3 things:

The desired outcome can have multiple facets. What do you want? What does your partner want (or any other stakeholder)? Assumptions and facts are closely related. Don’t miss writing down ‘facts’ that are core to the solution or its approach. Sometimes you add those facts because that’s how it’s always been. Although, in this particular instance it isn’t and nobody thought it necessary to point it out. I have been in that trap.

In the Military they have a ritual to repeat the given order. Speaking it with your own words increases the understanding. It also more likely triggers questions. Hence I’ve started a habit to finishing meetings by having action items confirmed by the people who are doing them. I learned to have some minutes spare for arising questions and be prepared for making time for individual clarifications.

How do you deal with assumptions?